On Monday 21-May, Microsoft delivered the keynote speech at the SharePoint Conference in Las Vegas. While much attention has been given to the announcement of Microsoft bringing Mixed Reality to SharePoint Online via SharePoint spaces, I thought I would take a few minutes to summarise some of the other announcements and how they relate to the trends we’ve witnessed in SharePoint Online’s evolution over the last couple of years.

The first observation that I found intriguing was how Microsoft has clarified the position of SharePoint within Microsoft 365 and are now using the tagline “Content collaboration for the modern workplace”. I think this is both a recognition of SharePoint’s core focus of providing content services across the suite of Office 365 workloads but also a repositioning away from the “Swiss army knife” metaphor that was often used to describe SharePoint, particularly on-premises, in the past. Previously, SharePoint was something of a jack-of-all-trades product that, on top of its core document and data management capabilities, offered capabilities around social computing, project and task management, business intelligence and application development. While it was competent at all these services, there were often cases when there were simply better ways of meeting those business requirements using other products/services. Now, as a part of Office 365 rather than just a single product deployment, it has shed some of these capabilities and frankly, seems more at ease with itself. This has been borne out of the deliberate and focused product evolution we have seen since the May 2016 “Future of SharePoint” event. Now, it seems SharePoint has a clear position and relevance to Microsoft 365 and is summarised nicely in the keynote speech. 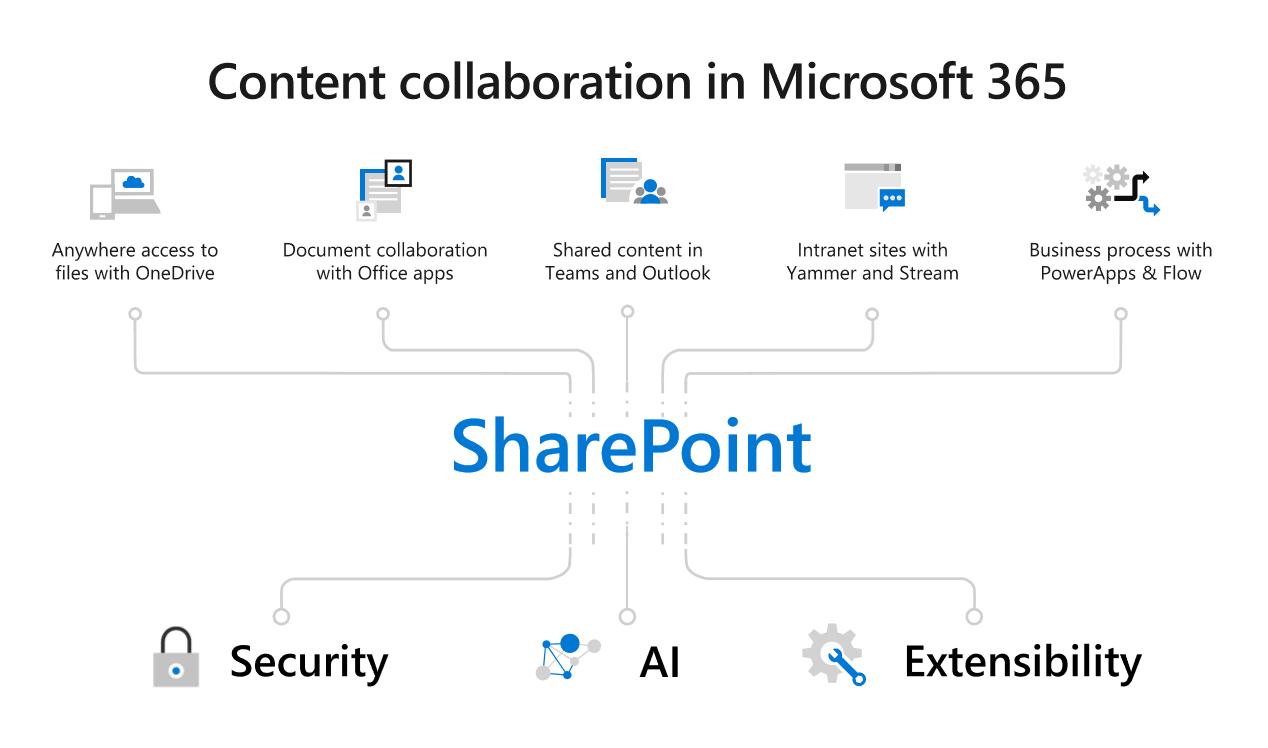 Beyond the announcement of SharePoint spaces, the overall impression of the announcements made at the SharePoint Conference was something of an evolution rather than revolution. In my view this was both right and fitting. With SharePoint’s move to being developed first in the cloud, the rate of product development has rocketed. Rather than new versions appearing every 3 years or so, SharePoint, like all cloud services, is on a much faster release cadence. As a result, since the May 2016 event, the SharePoint team has been able to focus and communicate on what they expect to deliver in the short-to-medium term. Something of a natural rhythm for disclosing SharePoint enhancements has emerged by having both a dedicated SharePoint event in May as well as a mini-keynote at the major Microsoft Ignite conference in September. As a result, these announcements feel more tangible and have greater immediacy as Microsoft has proven, by and large, capable of meeting the planned dates for delivery.

The other aspect of these announcements having an evolution theme was that it now feels like all the foundational overhaul engineering work of modernising SharePoint is complete and now the focus is on adding value to that investment.

This was evidenced by the announcements around the SharePoint News service. First introduced with modern Team sites and then subsequently added to with Communication sites, SharePoint News is fast becoming the de-facto way for organisations to keep their people informed of what’s happening, however, it has not been without its constraints. My principle concern has been the way that both the SharePoint home and the SharePoint mobile app aggregate news from across all the sites you follow. It essentially treats each news source as a peer meaning that a news article published on the company-wide communications site has the same weighting as a news story from an individual team site. This has often had the unfortunate effect of pushing the potentially more important organisational news story down the newsfeed and potentially missed by users. Clearly, there is a need to make organisation-wide news more easily identifiable. I’ve often expressed this need by adapting a well-known quote to “All news is equal. But some news is more equal than others.”

Therefore, the announcement that it will soon be possible for certain sites to be designated as “organisational news sources” was especially pleasing. As a result, news posts from such sites will be highlighted in both SharePoint home and the mobile app to provide the prominence they deserve. It will also be possible to filter news to show only organisational news.

In larger enterprise organisations, this change is going to be extremely welcome as company-wide announcements are a key requirement of an intranet and now makes the out-of-the-box SharePoint News service a viable option. SharePoint News will also gain some important features that will close the gap on the feature set that was previously only available in the traditional SharePoint publishing infrastructure or via intranet-in-a-box solutions. These key features are scheduling news publication, content approval, content aggregation and audience targeting.

Another welcome addition was the introduction of Microsoft Training Services and the provision of training and adoption content within SharePoint Online. With the rate of innovation in Office 365, it is a real challenge for organisations to keep their people up-to-date with new features and capabilities across all the products and that in turn has a negative effect on user adoption. Training departments, even in large organisations, find it a struggle to issue content in a timely fashion as new features are rolled out automatically by Microsoft. Therefore, Microsoft is looking to help organisations address this issue by introducing a service that will allow organisations to create a customisable learning service that can be tailored to the individual needs of the organisation that will include up-to-date content from Microsoft Training Services along with management and measurement tools to help the organisation track the effectiveness of the learning environment. 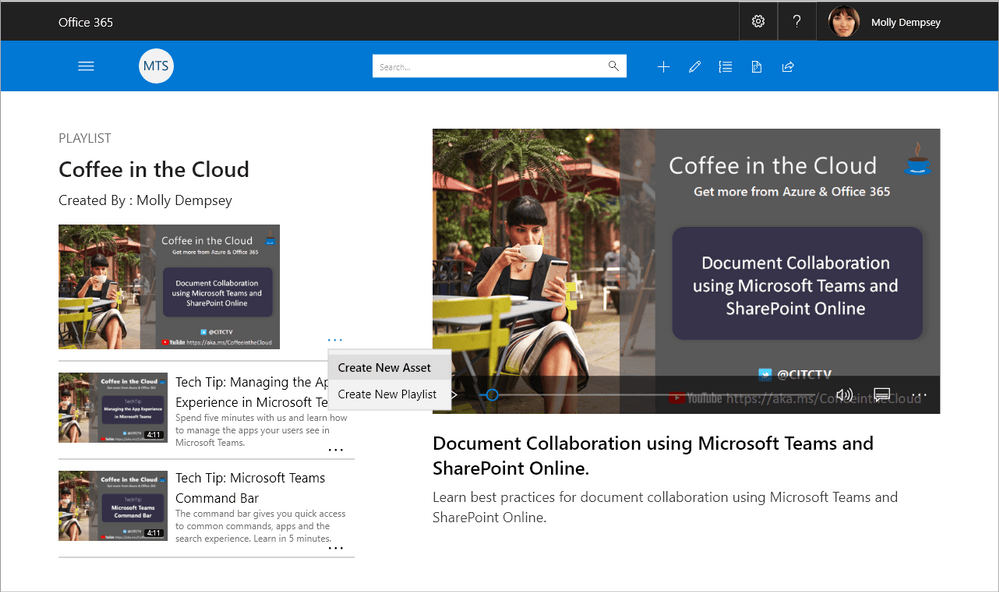 While there were many other announcements at the conference, the other main story that caught my attention was how much more tightly integrated SharePoint and Microsoft Teams are becoming. SharePoint document libraries are going to be significantly more capable when rendered in the Teams client including the ability to support drag & drop, document previewing, metadata and Flows. This will make it far easier to stay working within the Teams client and consume content from SharePoint without having to switch environments. The other area of tighter integration was the announcement that custom SharePoint Framework extensions will be fully supported in Teams. This means that if a SharePoint web part is developed it can be hosted either in SharePoint or Teams or both. Essentially, SharePoint is becoming a development platform for Microsoft Teams. Microsoft also suggested that this approach might also apply to Office add-in development too. It’s got me wondering whether the SharePoint Framework might get renamed to the Office 365 Framework in due course? Probably not.

Finally, it was pleasing to see Microsoft confirm many of the anticipated features that we predicted would be included in SharePoint Server 2019. 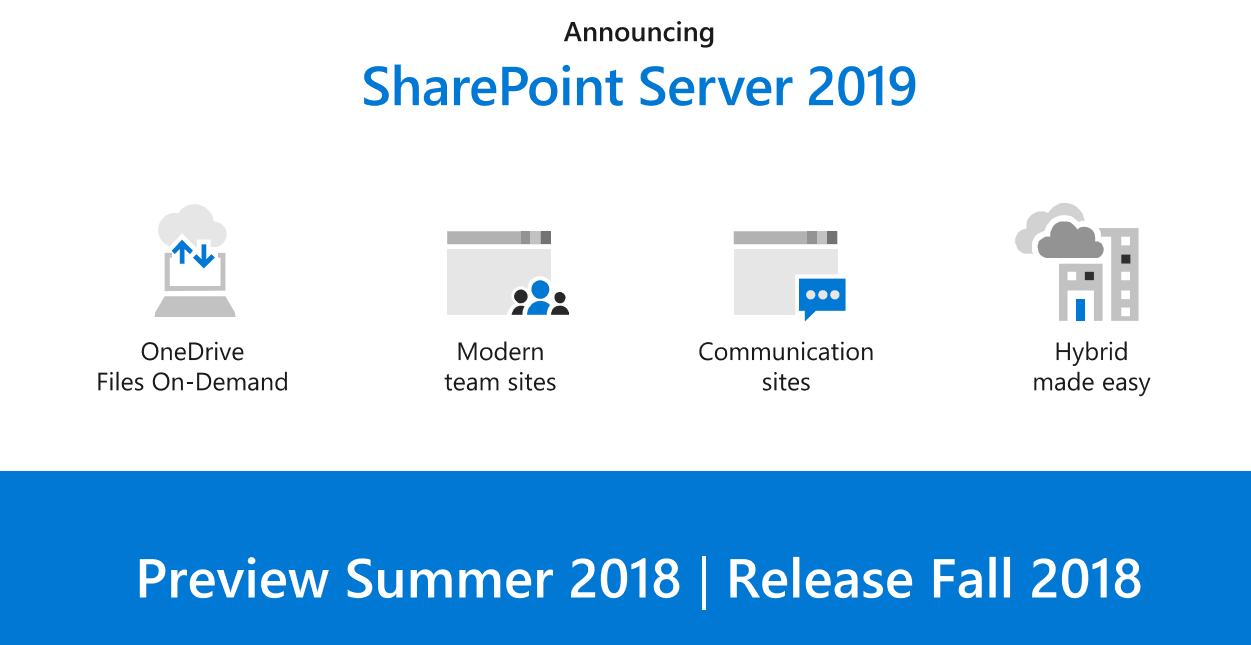 While we expected to see the modern SharePoint user interface in Team sites, I was pleased to see that both SharePoint home and Communication sites would be included, as well as some of the more recent enhancements to the SharePoint Framework that allow developers to build SharePoint extensibility solutions for both cloud and on-premises using the same toolkit. With a significant proportion of our enterprise customers running SharePoint on-premises, we will be keen to evaluate the preview when it is released in the summer and report back our thoughts.