The extended scope of retention in Microsoft 365

Microsoft’s Ignite Conference is always an exciting time of year for everyone working in Microsoft 365 – it’s a huge unbottling of new features and functionality that is hard to absorb in one go. I’m still using any spare time I can find to work my way through some of the sessions that I haven’t yet been able to catch up with.

For those of us interested in records management, probably the most interesting new announcement was the introduction of the new ultra-compliance Regulatory Retention Labels – if you missed my post on the subject, you can find it here:

A quick look at the new Regulatory Record Labels

One of the newer Microsoft 365 capabilities introduced at the Ignite 2020 conference this week is ‘Regulatory Record Labels’...

However, Regulatory Record Labels were far from the only new records management capability that was introduced, with other announcements seeing the scope of retention extend into new areas of Microsoft 365.

While it’s been on the Microsoft 365 roadmap for a while now, I’m delighted that we finally have the ability to use the Compliance Center’s retention capabilities in Yammer. Specifically, Retention Policies are being rolled out for preview, so they are likely to have already made their way to your tenancy.

Until now, retention of Yammer messages really couldn’t be achieved with native Microsoft 365 capabilities alone. We did have Yammer’s somewhat confusingly named ‘Data Retention’ features, which are used to allow (or prevent) deleted posts from being included in data exports – however, these had little to do with retention as we’d know it. In fact, up until this month’s announcement, the only content in Yammer that could benefit from the Compliance Center’s retention capabilities were files that had been shared in Yammer messages – this was effectively enabled in May 2019 when the storage location for files uploaded into Yammer was switched to being the associated Microsoft Group’s default SharePoint document library.

One thing to mention is that your Yammer network will need to be configured to operate in Native Mode3. This mode effectively integrates Yammer more closely with Microsoft 365 Groups. It also enables eDiscovery and makes use of SharePoint to store files that are uploaded to Yammer. As such, I’d typically recommend using Native Mode for any organisation who hasn’t yet done so.

It’s also important to stress that each Retention Policy that we apply to Yammer will either need to be applied to all of the messages in a given Yammer Community, or to all of the private messages exchanged by a given user. As such, we will not be able to single out individual messages that are more important or valuable – for now all messages in the same part of Yammer will be subject to the same retention.

Stream is one of my favourite workloads in Microsoft 365 – having an integrated video-hosting service within the tenancy is really useful. However, what I love most is Stream’s automated video transcription services, which automatically creates closed captions for your videos. Not only does this make Stream videos highly accessible, but it also means that videos can be found when searching for a phrase that was mentioned somewhere in the recording. This is exactly the sort of wow-factor that sets Microsoft 365 ahead of the competition!

Until Ignite, the retention capabilities of Microsoft 365 haven’t included Stream within their scope. This has been an obvious omission, preventing information and records managers from having any real control over the way videos are governed in Stream. However, the announcement at the Ignite Conference of a new vision for Microsoft Stream looks to have changed this – once rolled out, it looks like we’ll have the ability to apply retention to our videos.

At the moment, Stream has its own dedicated storage, which is separate to other parts of Microsoft 365. The primary change that is being introduced by this new vision for Stream, is to switch the storage, so that all videos will be hosted in the relevant SharePoint site or within OneDrive. Fundamentally, this will change the way we all understand Stream – it should really be considered more of a tool akin to Excel or PowerPoint, an application for viewing and editing videos as opposed to a video storage service.

This change might seem subtle – I mean, who cares where the video is stored! But I feel that it’s actually going to significantly improve our ability to use, integrate and govern videos in Microsoft 365.

Most importantly from my perspective, once the back-end is switched (which is currently scheduled for November 2020), we should be able to extend the capabilities of SharePoint onto our videos. This immediately opens up a wealth of possibilities – including, finally, the ability to apply retention to videos. Even more exciting for me is that Microsoft is already talking about retention of your Stream/Teams meeting recordings. As such, we’re not talking about the relatively limited Retention Policies2, it looks like we’ll instead be able to bring the full power of Retention Labels to our videos.

I want to get my hands on the new Stream and play with it myself to see exactly how it is going to work, but it certainly promises to significantly improve our ability to effectively manage videos. However, there are a few things I want to investigate before I allow myself to get too excited:

Overall, I feel that the new vision for Stream looks to offer a lot of potential upsides. Being able to apply retention to videos is something that many have been crying out for over the past few years – especially as video is becoming more extensively used for communication and collaboration in the workplace. I’m sure that many organisations will need to re-evaluate the way that they create meetings, so that recordings are stored in the most appropriate workload. I’m also very optimistic that the limitations will quickly become addressed allowing us to take advantage of the improved retention for Stream video, without drawbacks.

Successfully applying retention to your Microsoft 365 content is a real art that often requires careful planning and analysis. Intelogy’s Information Management & Compliance practice specialise in providing our clients with practical records management solutions that are tailored to meet your governance needs. 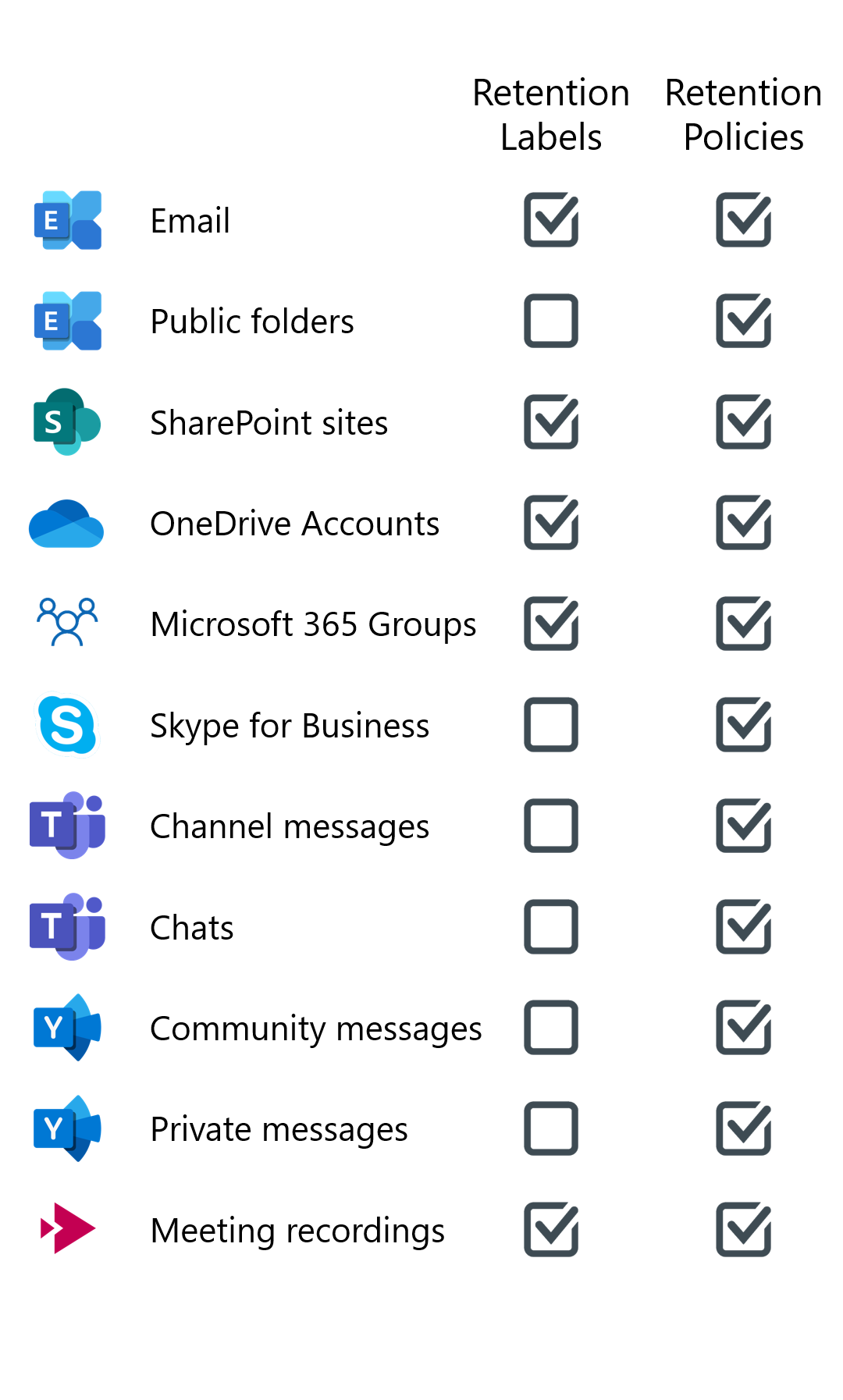 Get in touch today to speak to one of our compliance experts.

2 I’m assuming that both Retention Labels and Retention Policies will be available to apply to meeting recordings in SharePoint/OneDrive – however, Microsoft’s documentation to date focuses on the former.

3 Find out more about Native Mode in Yammer here: https://docs.microsoft.com/en-us/yammer/configure-your-yammer-network/overview-native-mode.