While most of us have enjoyed some sort of time off this summer, it seems the engineering teams across the Office 365 suite of services have maintained a steady release cycle. Here’s what was new this month.

There is still yet more to come, especially in the area of calling features as Microsoft now turns its attention to bring functionality previously found only in the on-premises Skype for Business Server product (e.g. Call Park, Group Call Pickup) to Microsoft Teams.

There has been a range of updates across SharePoint functionality this month. Here are some key updates that have caught our eye.

When SharePoint hub sites was first introduced earlier this year, we highlighted in our March round-up that there was an imposed limit of 50 hub sites per tenant. Our understanding was that this was done as a means to limit the proliferation of hub sites within a tenant and encourage organisations to consider how best to make use of hub site functionality and accordingly plan out their use. This month, the limit for the number of hub sites in a tenant was doubled to 100. For us, this is a welcome change as we use hub sites primarily to aggregate all individual project teams & sites on a per-client basis making it easy to find and access all information relating to that client and/or project.

Additionally, hub sites have received an update to support the new SharePoint site designs and site scripting feature.  Previously, when a site was associated with a hub site, only the site theme from the hub was applied to the site.  Now when a site is associated to a hub site, existing site designs and site scripts can be run to ensure that the site applies a defined set of configuration changes and thus ensures some consistency across all sites associated with the hub site. Those changes could be to apply specific permission changes, apply information management polices, configure new lists or libraries or deploy SharePoint customisations. This change was rolled out initially to Targeted Release tenants this month with a worldwide roll out expected by early October.

Building on the work that we highlighted in last month’s round up, further improvements have been made to the page editing experience in SharePoint.

Firstly, if someone else is already editing a SharePoint page then when a user attempts to edit the same page, they will be notified who is currently working on that page. 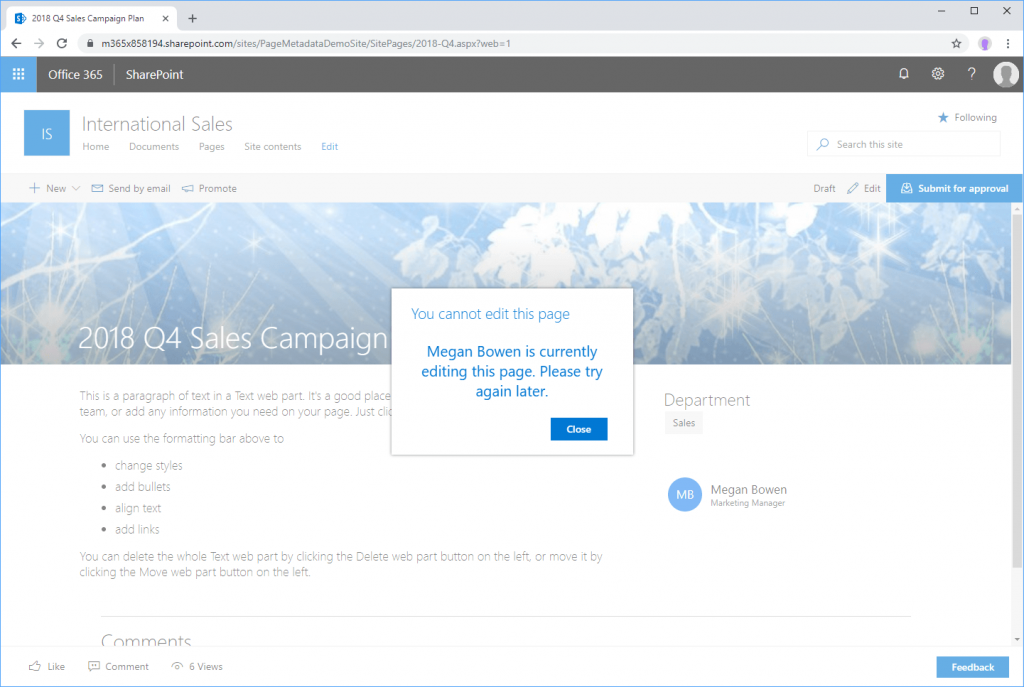 If no edits are made to that page within a 5-minute window, SharePoint will release the lock on the page allowing others to edit.

A number of web parts were also updated this month providing additional features and layout choices for rendering contents:

Quick links – 4 new layouts have been added (Buttons, Grid, List & Tiles). Additionally, each quick link can be provided a custom icon with the choices available from Office fabric icons or custom uploaded images 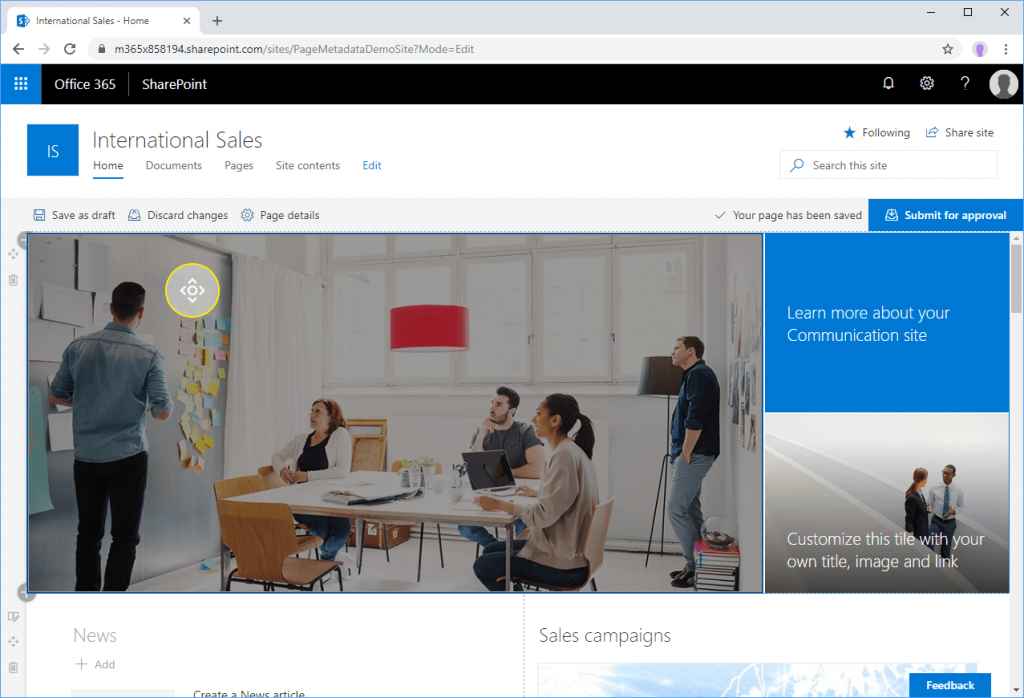 News – the carousel layout allows visitors to focus on a single story and swipe to move between stories.

As part of the new theming support for modern SharePoint sites (see our March roll-up), a new feature has been added to the Change the look panel that allows a site owner to set the degree of colour emphasis (None, Neutral, Soft & Strong) used in the header section of all pages in the site that use a standard SharePoint Online theme. 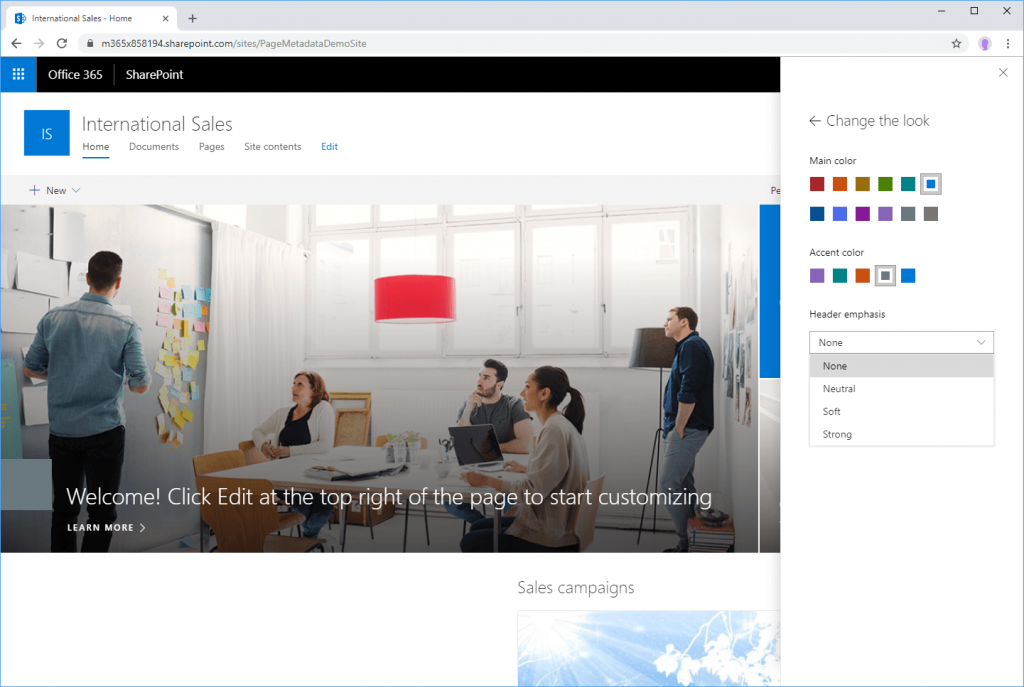 Communication site with no header emphasis 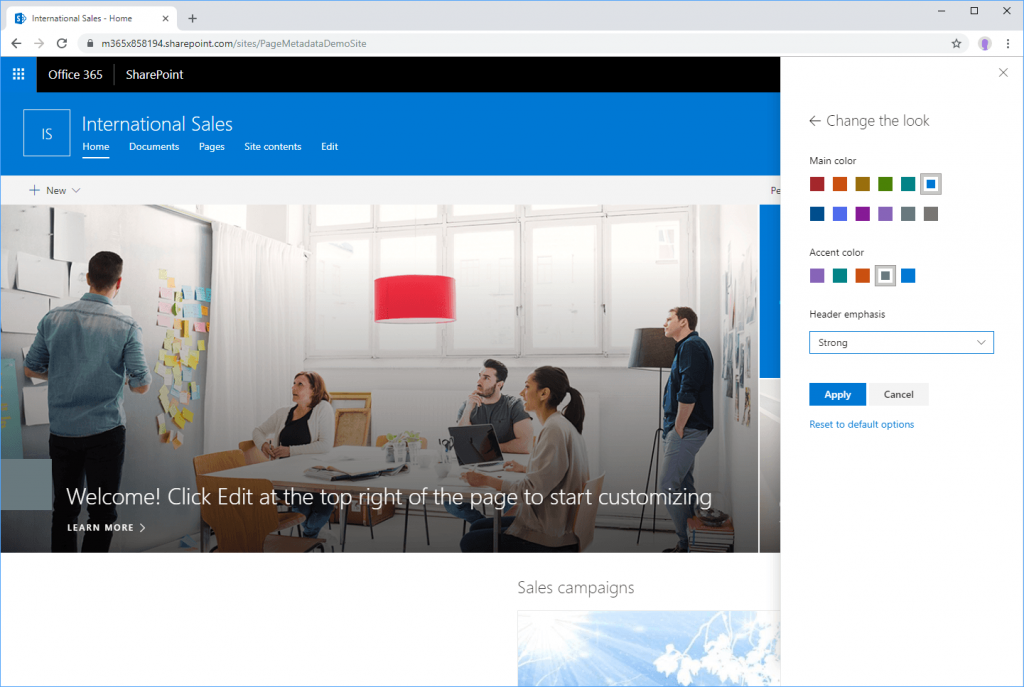 Late last year, support was introduced for formatting columns in SharePoint views that provided a means to programmatically change the presentation of information and convey far more information.

This capability has now been extended to allow entire rows to be formatted. The approach and syntax are common across both formatting capabilities, requiring some technical knowledge of JSON notation.

The ability to format the view is accessed via the Format current view option provided to site editors in the view selection dropdown. The flyout pane then allows the customisation definition to be entered (we would recommend using a JSON aware editor such as Visual Studio Code) and previewed before being saved. 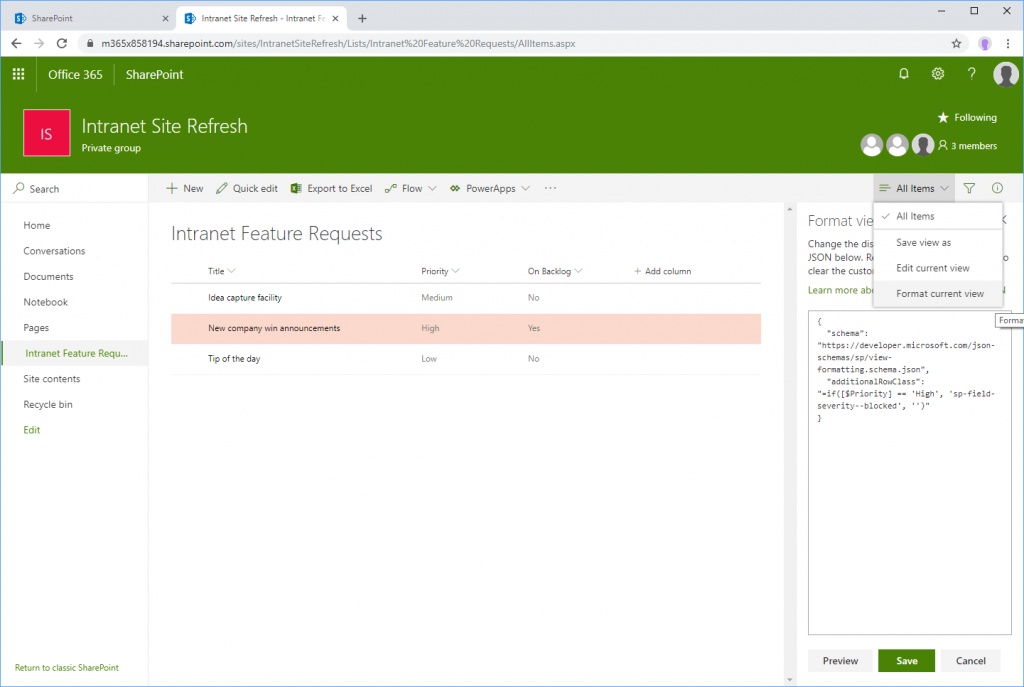 Example of row formatting by highlighting row where Priority is “High”

Mass delete notification in SharePoint Online and OneDrive for Business

No doubt benefitting from Microsoft on-going work with Artificial Intelligence & Machine Learning, Office 365 will now monitor activities within SharePoint Online and OneDrive for Business and react when unusual amounts of file deletions occur and consequently act by sending emails notifying the user of the event. The notification will also include an option to restore the deleted files from the appropriate recycle bin as well as an ability to unsubscribe from future notifications.

Microsoft were quick to stress that this should not be considered as a “fail-save file recovery solution” but rather a best endeavour to help prevent accidental data loss. This feature will be released worldwide by late September, with exceptions for some Office 365 regions.

Major changes were announced for the SharePoint mobile app this month, probably bringing the biggest set of changes since the original launch of the app. With this release 3 areas of functionality (Links, Sites & People) have been collapsed into a single, AI augmented tab called “Find” that is designed to allow users to find the content, people and answers they need quickly, easily and when on the go. 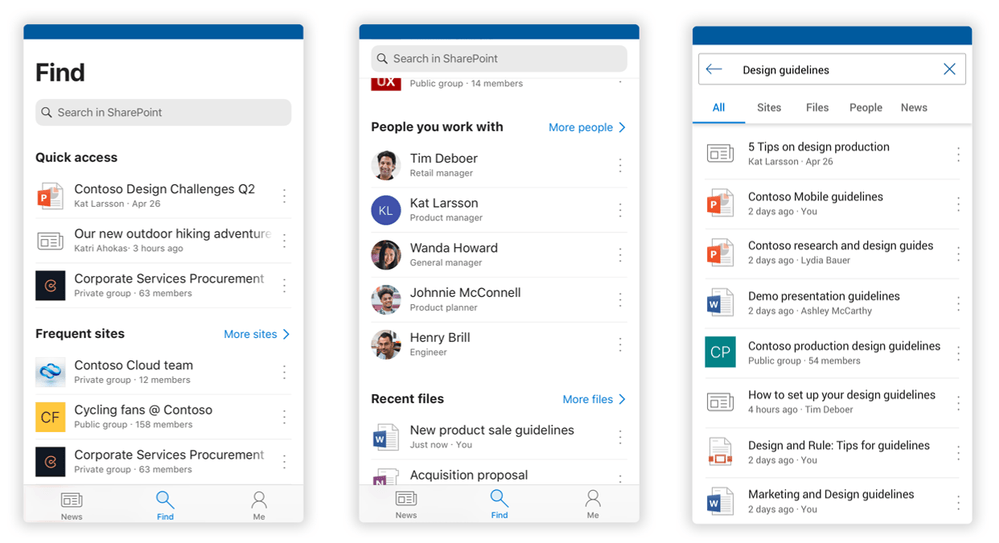 With so much delivered now via the Find tab, the existing News and Me tabs gain more prominence. Undoubtedly, we’ll hear more about the News tab shortly as additional capabilities, such as Organisational News is launched, and the Me tab continue to provide the personalised access to content that you have recently interacted with again shortening the time to access the information you need when mobile.

Last month, the emphasis was on updates to OneDrive on the Web, on Windows and on Android, this month OneDrive on iOS has received a number of useful productivity updates.  They are as follows:

There were a couple of noteworthy announcements that should be of interest to Office 365 administrators this month.

Microsoft also announced this month that the Office 365 Roadmap would become the Microsoft 365 Roadmap in September and going forward would now also include details of Microsoft 365 related feature updates planned for Windows 10, Enterprise Mobility + Security (EMS), and Azure.

Microsoft announced a revision to the process that guides admins through the deletion of users using the admin portal. The intention of this guide is to highlight all the additional steps that are commonly required to successfully offboard a user from Office 365 and ensure important company data, such as emails and personal files, is not lost during the deprovisioning process.

The process is broken down into 3 main areas:

License recovery allows the administrator to keep on top of organisational use of licenses. Firstly, the guided process will remove licenses associated with the user account being deleted. Depending on the subscriptions within the tenant, the administrator may be given the opportunity to decrease the number of licenses accordingly or, and with certain subscription types, return the license to the pool of available licenses for subsequent reassignment.

For files not stored in shared environments such as SharePoint team sites and now with so many capabilities for users to share personal documents, the deprovisioning process allows another user to be granted access to the OneDrive file of the account being deleted and ensure that any critical business documents are retained.

Finally, there is a step-by-step guide for decommissioning the mailbox ensuring that:

An owner is assigned to the shared mailbox 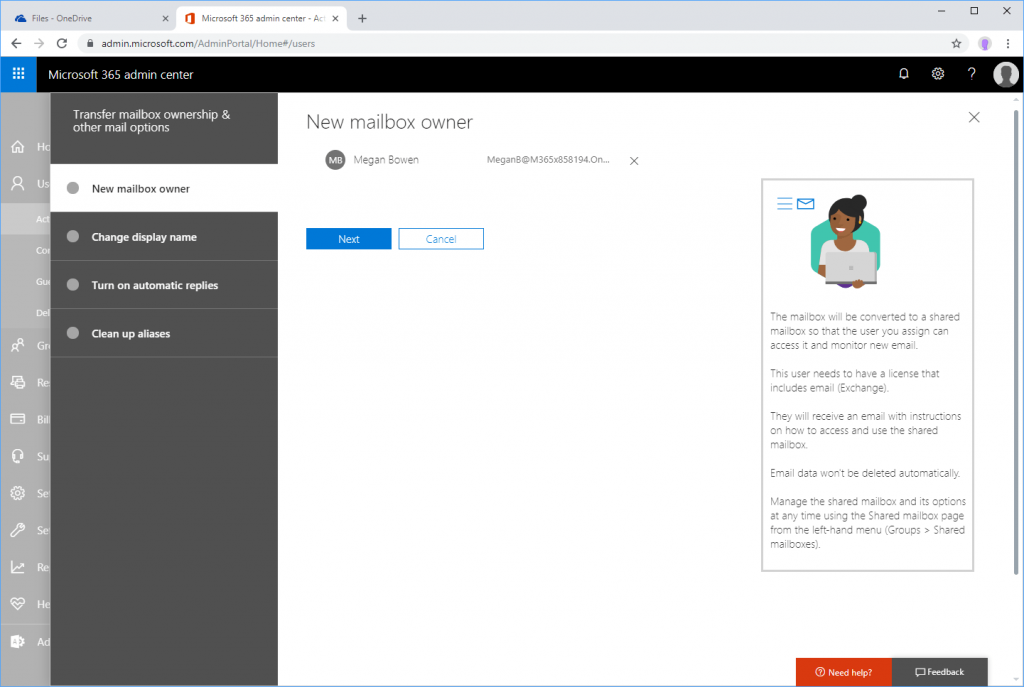 The mailbox is converted (and ideally renamed) to a shared mailbox 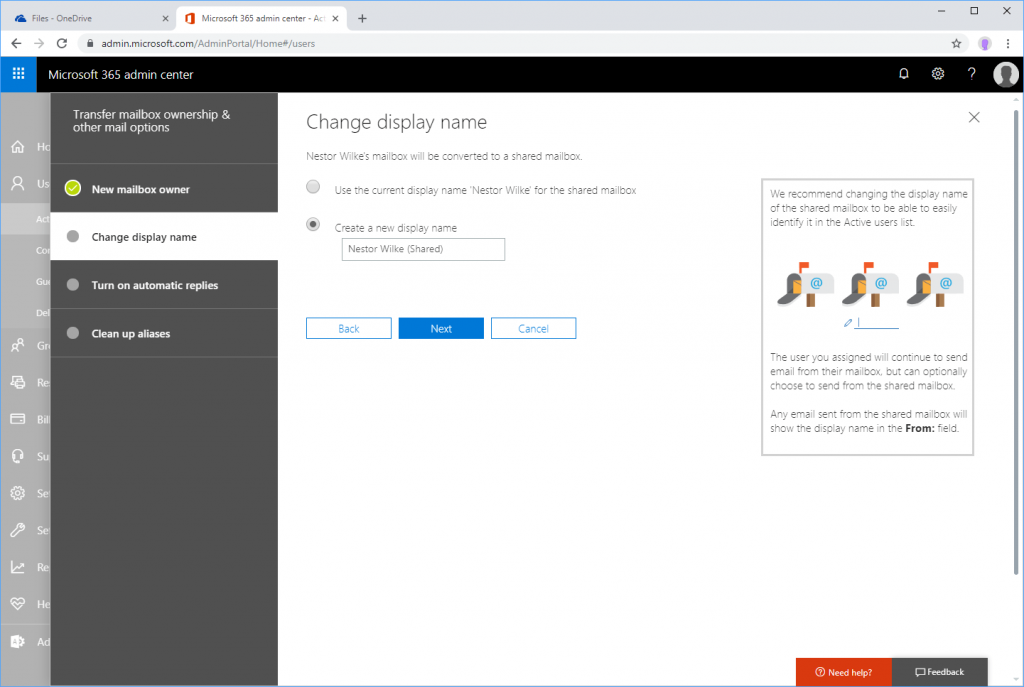 Any aliases associated with the mailbox are removed 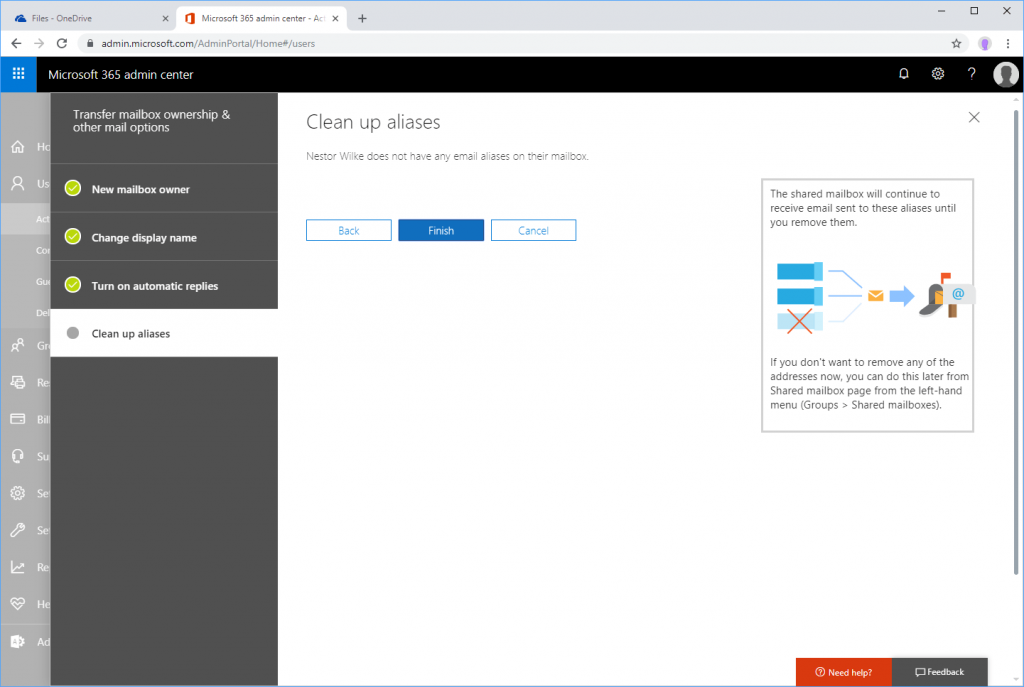 After a series of confirmation screens, the process runs and completes by sending notifications to the new owners of the OneDrive and Shared Mailbox providing instructions on what to do next. 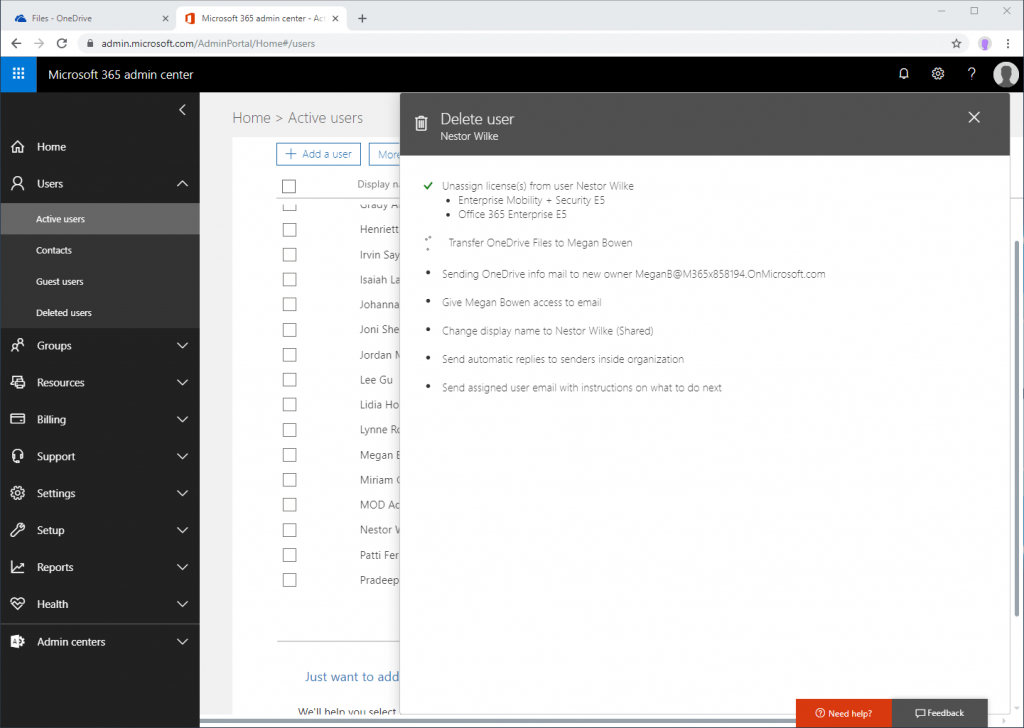 Microsoft will be hosting its annual Ignite conference at the end of September. We are expecting a huge number of announcements across all of Office 365 at the conference. No doubt there will be plenty to blog about next month!