The release cycle of Office 365 shows no signs of slowing down.  In fact, quite the opposite seems to be true and no more so this month.  To help keep up-to-date with what’s new in Office 365, we plan to produce a summary every month of the key news that has occurred in that month.  It won’t be exhaustive (or exhausting, I hope) but rather highlight those announcements and releases that I feel are most pertinent and interesting.  So, let’s get started.

We use lots of SharePoint lists to manage data and while the new modern user experience in SharePoint Online is a massive improvement on the old interface, it is still something of a work-in-progress.  While it has been possible to edit multiple items using the “Quick edit” button in the modern toolbar, that experience means that you are limited to only update the metadata fields that are shown in that view. 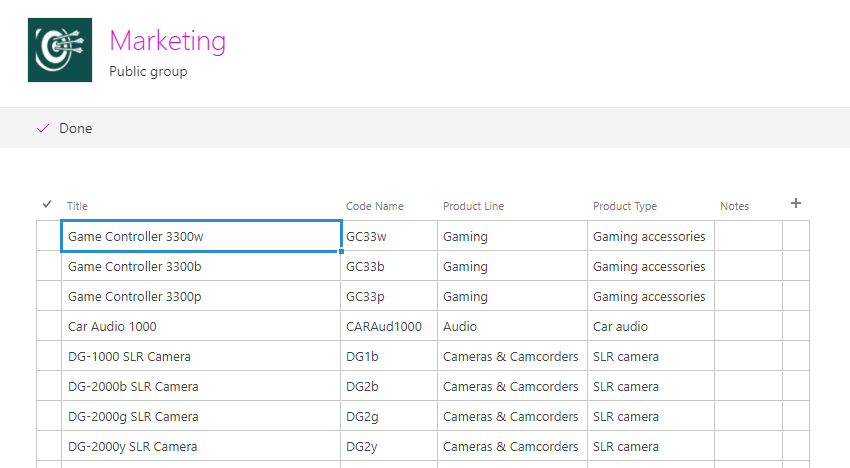 With the new bulk editing feature, you can now select multiple items in the regular SharePoint list view and the information panel will show all columns shared by the selected items allowing them to be updated even if they are not shown in the view (e.g. the Colour selector is available). 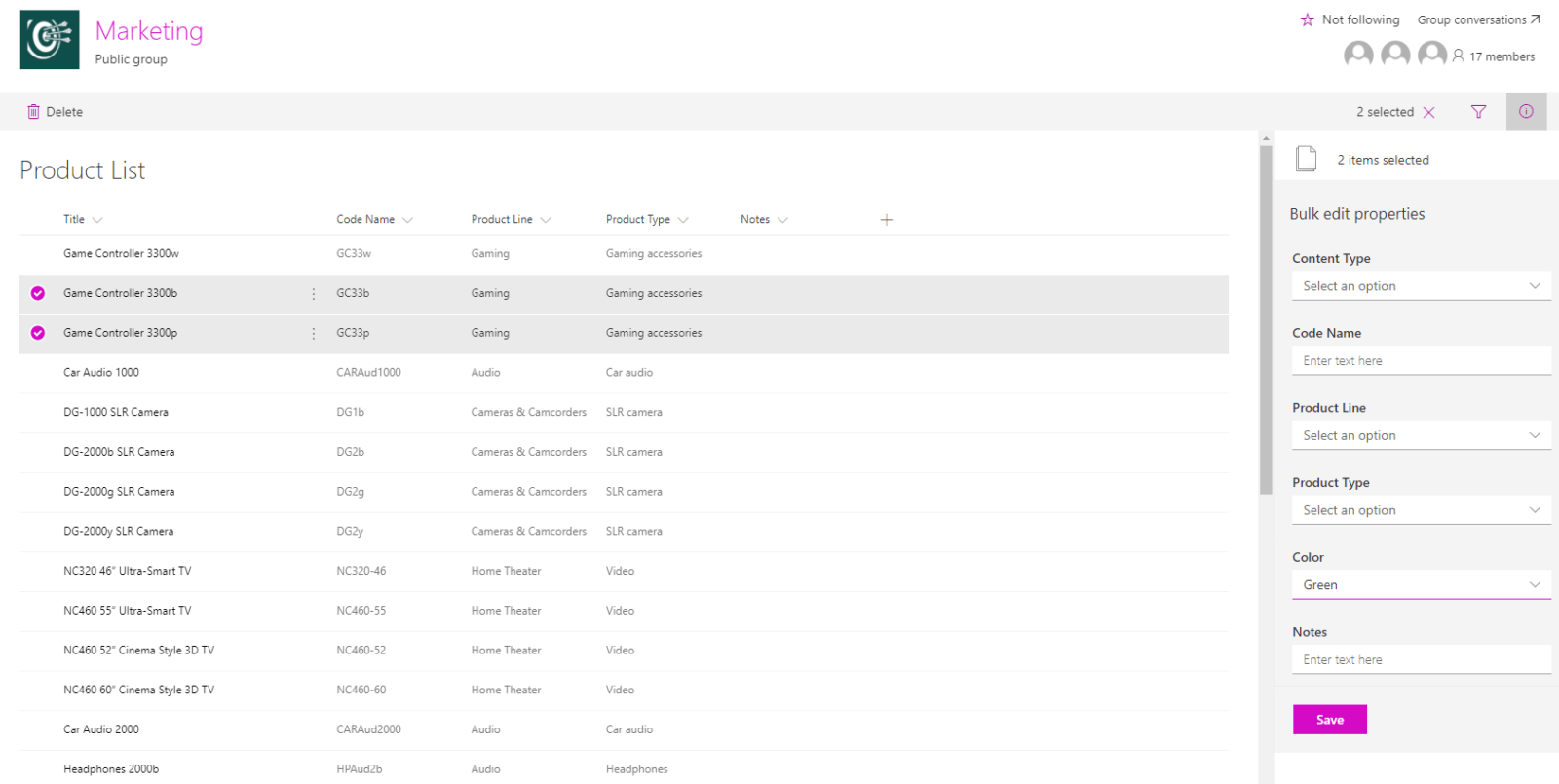 This feature was released to Targeted Release tenants in early January with an expected roll-out to be completed by the end of the month.

In January, a number of enhancements that were first shown off at the Ignite 2017 conference started to be rolled out to Targeted Release tenants.  These features are:

SharePoint Server has always provided methods for deploying standardised designs for SharePoint sites, however, in SharePoint Online those traditional methods have some major drawbacks and it is now generally accepted common practice to avoid using these approaches wherever possible.  This has, however, created something of a vacuum in the area of provisioning new sites that conform to defined standards or templates.

This month, Microsoft has introduced a method to allow SharePoint sites to be customised in a repeatable, consistent manner as part of the site provisioning process.  Each site design consists of a baseline site (e.g. team or communication site) and supplements it with a set of actions that can be programmatically performed on the newly provisioned site.  These actions include:

The process is seamless to the end-user, as shown in the screenshot below: 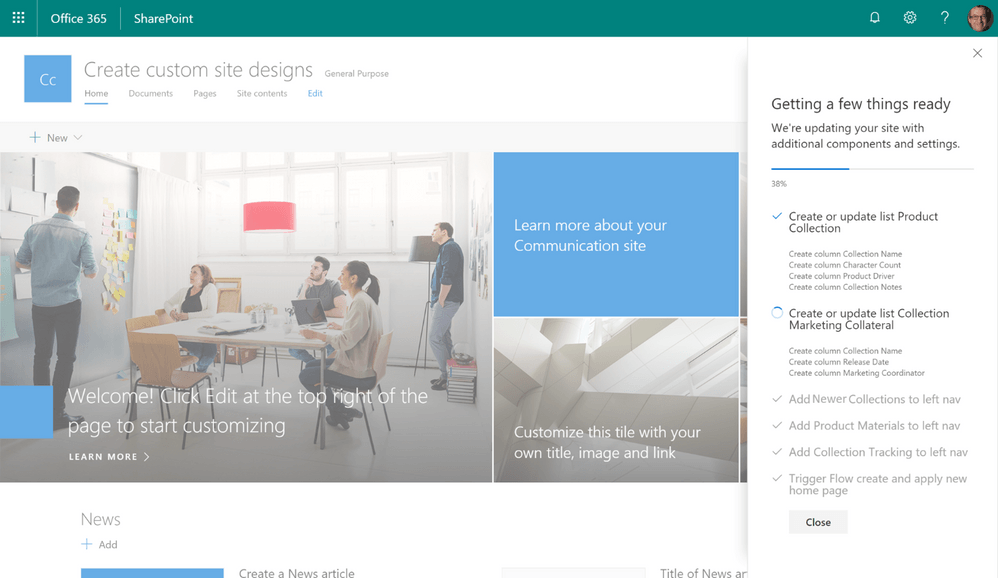 Site design and scripting is a great addition to SharePoint Online but there are circumstances where it will not be sufficient to meet exact requirements.  As site provisioning solutions are a key part of what we provide to our clients, understanding how to use this capability and/or other approaches is something we will discuss on this blog at a future date.

At the Ignite 2017 conference Microsoft announced its intention to provide a free, first-party migration tool for moving content to SharePoint Online and OneDrive for Business.  This tool became available for download in early January.

The tool itself is simple and minimalist.  This is evident from the user interface, which simply states that there is a 3-step process to follow: 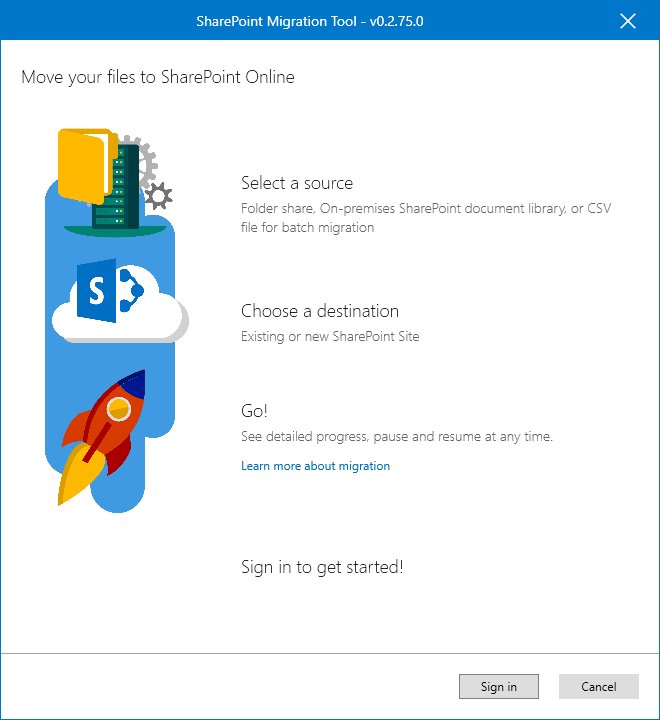 In terms of sources, the tool supports migrating files from SharePoint on-premises and File Shares.  Currently, only SharePoint Server 2013 is supported, but it is understood that support for SharePoint 2010 and 2016 is on the roadmap.  The files for migration can either be selected manually or a CSV file can be provided for bulk migration.  Thereafter, the destination location can be set to pre-existing document library in either a SharePoint Online site or OneDrive for Business account.

Naturally, Microsoft releasing a free migration tool has prompted some to ask what it means for vendors of other migration tools.  As partners of third-party Office 365/SharePoint migration tools, we know that these other products go well beyond what is and what will be capable with the Microsoft developed tool.  We feel there is space for both and the adage of the “right tool for the right job” rings true in this instance.  Expect us to expand on this in a future post.

The SharePoint Migration Tool is available for download here: https://aka.ms/spmt.  Microsoft will no doubt further enhance and add additional capabilities to this tool over time.  If you would like to get early access to those features be sure to follow the link “Install first release” on the SharePoint Migration Tool download page in order to ensure you get the new features as quickly as possible.

Moving content around SharePoint has always been an activity that proved harder to do than it should have been and short of using third-party management/migration tools, options have always been limited.  The modern document library experience has provided Microsoft with an opportunity to finally resolve this limitation and this month, Microsoft have built on the Copy to functionality that was introduced last year with enhancements to the Move to feature.

Starting in late January, the Move to experience will be updated to provide the means to move documents from OneDrive and/or SharePoint to locations across Office 365.  Significantly, it will now be possible to easily move documents between SharePoint sites.  The experience is powered by the Microsoft Graph meaning that the list of possible destinations is profiled according to each user (i.e. those locations where that user is most active will be listed first).  If the intended destination is not listed, then a means exists to browse to the correct location is available. 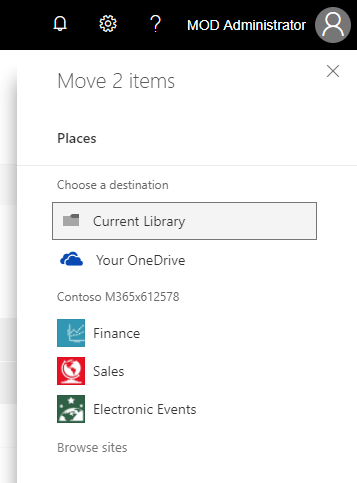 When files are moved all versions are retained whereas a copy will result in only the most recent version being copied.  Metadata associated with the file is preserved during the move.  As data loss will occur if there are discrepancies between the metadata columns between the source and destination locations then the user is prompted to confirm before proceeding with the move.

The Move feature enhancements started rolling out in late January and unlike some of the previously mentioned enhancements, this roll-out is expected take slightly longer to reach all Office 365 tenants in order to address any issues or feedback Microsoft receive.

While the need to be able recover data from accidental or malicious activities is a common issue, the “Wannacry” incident last year highlighted the need for everyone, individuals and organisations, to consider the implications of encryption attacks on their data and the need to be able to quickly restore files to a known good point-in-time.

Traditionally, data restore activities require direct involvement from IT professionals in order identify the files that are affected, locate the most appropriate available back-up, execute the restore and inform the requestor that the restored data is now available.

This month, Microsoft began rolling out an update to OneDrive for Business that provides a complete self-service approach to data recovery.  Within the OneDrive for Business web interface, a user can select to restore their OneDrive files to the state they were in at any time, down to the second, in the last 30 days.  The restore process then will effectively roll-back all changes made in the OneDrive since that point. 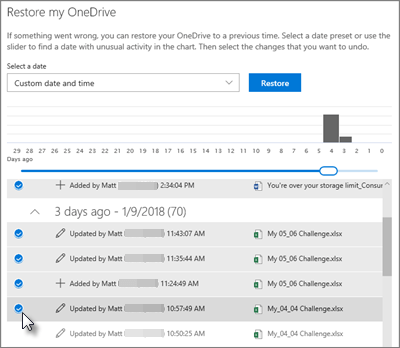 When attacks like WannaCry are considered, the ability to perform mass point-in-time restores is a hugely beneficial addition to OneDrive.

While the roll-out is currently restricted to OneDrive for Business at this point in time, it is our understanding that this restore capability will be added to both SharePoint sites and consumer OneDrive at some point in the future, but Microsoft are yet to confirm these plans.

The rollout is expected to be completed by mid-February.  You can read more about OneDrive Files Restore here: https://support.office.com/en-us/article/restore-your-onedrive-fa231298-759d-41cf-bcd0-25ac53eb8a15

One of the truly great features of Office 365 is the increased support for mobile working that it brings.  Microsoft has an extensive range of applications on mobile platforms and this month a significant number of features were added to the iOS apps all in the name of enhanced productivity.  The key new features are:

Just when I thought January had already given us so much, on 30 January unveiled a huge update to Microsoft Teams.  I have longed viewed the Teams client as the unified client for accessing Office 365 services and this update has only served to further my belief in this regard.  In fact, there are so many additions in this update that we will have to follow this summary up with a more detailed post but in the meantime, the key changes are:

Expect a deep-dive into all these changes in a future post.

Finally, there are some notable changes coming soon that we are particularly keen to see be delivered.  Here are just a sample of what we are tracking.

Microsoft announced that starting on 01-Feb-2018 the roll-out of the new SharePoint Online Admin Center, that was first shown off at the May 2017 SharePoint Virtual Summit, would begin rolling out to Targeted Release tenants.  The new Admin Center is due to bring a significant amount of additional functionality, especially around managing new modern Team sites and Communications sites.  We are looking forward to experimenting with the new features and will no doubt report back in due course.

Working on it: SharePoint URL renaming

Early in January, Microsoft confirmed that they are working on a means to allow SharePoint Online URLs to be updated after creation.  Currently, all SharePoint Online URL use the format https://tenant.sharepoint.com.  Often it is the case that there is a preference to use an alternative prefix other than the name of the Office 365 tenant either due to the implications of selecting a tenant name not being fully understood at the time of creation or because of organisational changes (i.e. rebranding exercises/mergers & acquisitions).   So to borrow the usual Microsoft fictional company names, it should be possible to rename SharePoint Online URLs from https://contoso.sharepoint.com to https://fabrikam.sharepoint.com once this feature is released.  Perhaps more relevant though is that Microsoft also confirmed that this same functionality should enable a SharePoint URL to be changed at the individual site collection level meaning that contoso.sharepoint.com/sites/abc can be changed to contoso.sharepoint.com/sites/xyz.  Now that will make a lot of people happy!  We don’t know when this feature will be enabled, and it is entirely possible that the work may be cancelled.  I hope not as the capability exists in SharePoint Server already so I’m keeping my fingers crossed on this one.