Here is our latest round-up of what’s new in Office 365.  There have been some big announcements and we are excited to share our thoughts on what’s been unveiled.

Hub sites have started rolling out

In our last round-up blog – “What’s new in Office 365 – February 2018”, we said we were looking forward to the availability of SharePoint hub sites and Microsoft duly delivered in late March by starting the rollout of hub sites to Targeted Release tenants with the intention to complete the worldwide rollout sometime in May. Essentially, hub sites provide the ability to group SharePoint sites together and provide a consistent experience across them. There are 4 fundamental benefits that hub sites deliver:

As ever, there as some limitations/restrictions with hub sites that can be summarised as:

Overall, we are impressed by hub sites. In fact, we have already deployed them in our own SharePoint Online environment to help us join-up the various project delivery team spaces on a per-client basis.  With this configuration, we can easily traverse multiple team sites for the same client and search for project documentation across all projects.

Hub sites help to breakaway from the traditional hierarchical structure of SharePoint sites (and sub-sites) that was always fine at the point of initial creation but struggled to cope with changing organisational structures. Hub sites further the recognition of the now preferred wide-and-shallow information architecture approach, where there is effectively a site for individual themes/initiatives, by providing a construct that is simple to implement, effective in its delivery and adaptable to change. Microsoft has signalled that there is yet more to come with hub sites, but it is undoubtedly off to a good start.

In our quick lap around the new SharePoint Admin Center Preview blog post, we highlighted many of the features of the new experience and since that time Microsoft has added several additional capabilities.

In our initial review, we highlighted that it was not possible to change the External Sharing settings for sites, but this has now been addressed with a new settings panel available from the properties pane for a selected site: 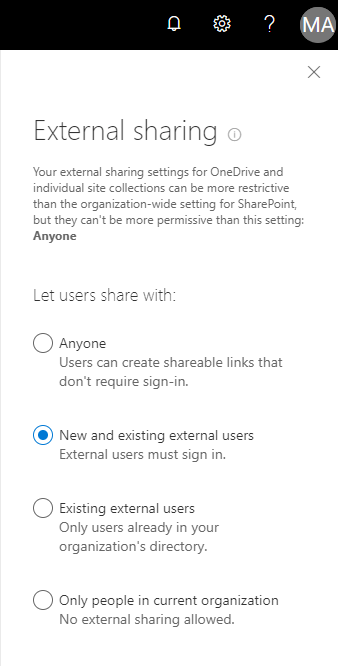 Sadly, this feature is only available when a single site is selected. We think this would be an ideal feature to be able to be used with a multi-selection of sites.

The site management page has also been updated to allow admins to save custom views, again something we called out in our initial review. 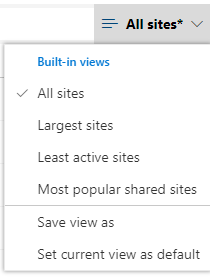 Some other features have been added including improving the format of emails sent to site admins, improving search to find sites in large tenants and other minor UI tweaks (e.g. renaming “site recycle bin” to the more informative “deleted sites”). The new experience is still in preview and there are many more features to come before we can recommend switching to the new experience and, inevitably, unless you are prepared to do all your SharePoint admin activities via PowerShell, switching between the 2 modes will continue for some time yet.

When the modern SharePoint user experience was introduced, it brought with it a new model for changing the look and feel of the site. Until recently, this was only available for Office 365 group-connected and Communications sites, but now existing classic team sites can apply modern themes, including custom themes, in the same way as these modern SharePoint Online templates.

Announced, albeit in passing, at the SharePoint Virtual Summit in May 2017, SharePoint Online now supports multi-geo configuration along with Exchange Online and OneDrive for Business. Multi-geo support enables multi-national organisations to meet data residency requirements with a single global Office 365 tenant rather than fragmenting their deployment (and users) across separate tenancies. When enabled, multi-geo support allows administrators to define satellite geo locations that apply to the organisation and manage the allocation of resources (users & files) and configuration rules (i.e. access policies etc.) of that geo location.

It is worth noting that Microsoft has stated that multi-geo support is not designed or intended for performance optimisation (i.e. having users physically closer to their data) but instead exists to help organisations meet their specific data residency compliance requirements. Availability of multi-geo capabilities is also limited, at present, to organisations with a minimum of 5,000 Office 365 users.

Having first appeared over a year ago in Education versions of Office 365, Microsoft Forms has now become generally available for all Office 365 commercial customers. Microsoft Forms allows anyone to create and distribute forms, gather responses and analyse the results. Typical use cases for Microsoft Forms are simple polls, surveys and data submission forms.

As a web-based tool, forms built can be distributed across several different endpoints. For example, there is a Forms web part for SharePoint allowing a site to host a company-wide survey. Microsoft Teams also has built in support for Microsoft Forms to facilitate data capture within a team. Recently, Microsoft Flow was updated to allow a flow to be triggered on submission of a Microsoft Forms response.

While Microsoft Forms is incredibly simple and easy to use, it should only be used for very simple processes and definitely not mistaken as a fully-fledged forms solution. There are certainly scenarios where Forms will be well suited to the task in hand but as the complexity of the requirements grow then an alternative approach, such as PowerApps or third-party forms solutions, should be used instead.

Microsoft recently addressed an integration pain-point between Planner and Teams. As Planner and Teams both share the use of underlying Office 365 Groups then every Team has a Planner plan. Teams also supports the ability to create plans within the existing team (e.g. creating a plan for a specific Teams channel), however, these plans were not shown when using the Planner app thus creating confusion for users. Now Planner shows all plans and provides a breadcrumb style notation to provide some context as to where plans have originated from along with the ability to launch that plan in the Teams client.

As a foundational component of Office 365, Microsoft has made some small but significant changes to Office 365 Groups recently.

In case it wasn’t clear, when a Team is created in Microsoft Teams then an Office 365 Group is created. The Office 365 Group identifies the group’s name and its members and owners. Groups can also be created in lots of different ways: directly in Outlook, when creating a new team site in SharePoint, when creating a new plan in Planner and so on. As all Office 365 Groups get a Shared Mailbox in Exchange Online then this has caused some confusion for users as to where conversations should occur for a group created in Microsoft Teams; in Outlook using email (think of it as like a distribution list) or in Teams as chat?

A small but welcome change is that the hover card for the Office 365 Group associated with a team site has been updated to be consistent with the layout, information shown, and functionality offered within Outlook. This updated hover card provides links to the various shared resources (e.g. OneNote, Planner etc.) as well as providing, depending on the permissions applied to the group, the ability to join/leave/follow/unfollow the group. 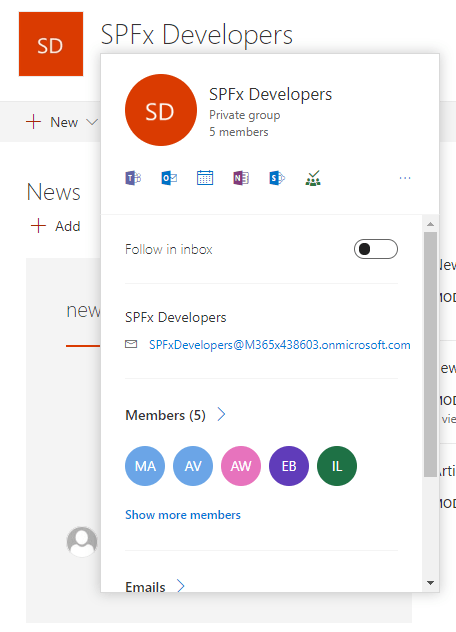 With Yammer’s role better positioned now around the concept of the “outer-loop”, the service continues to receive updates adding some useful new features.

Move conversations to a different group

A simple but effective improvement. Yammer now records how many people have seen a post and shows it to all.