London’s Air Ambulance (LAA) is a London-based charity serving 10 million people who live, work and travel within the M25. They deliver an advanced trauma team to London’s most seriously injured patients, with a mission to save more lives in London through rapid response and cutting-edge care. 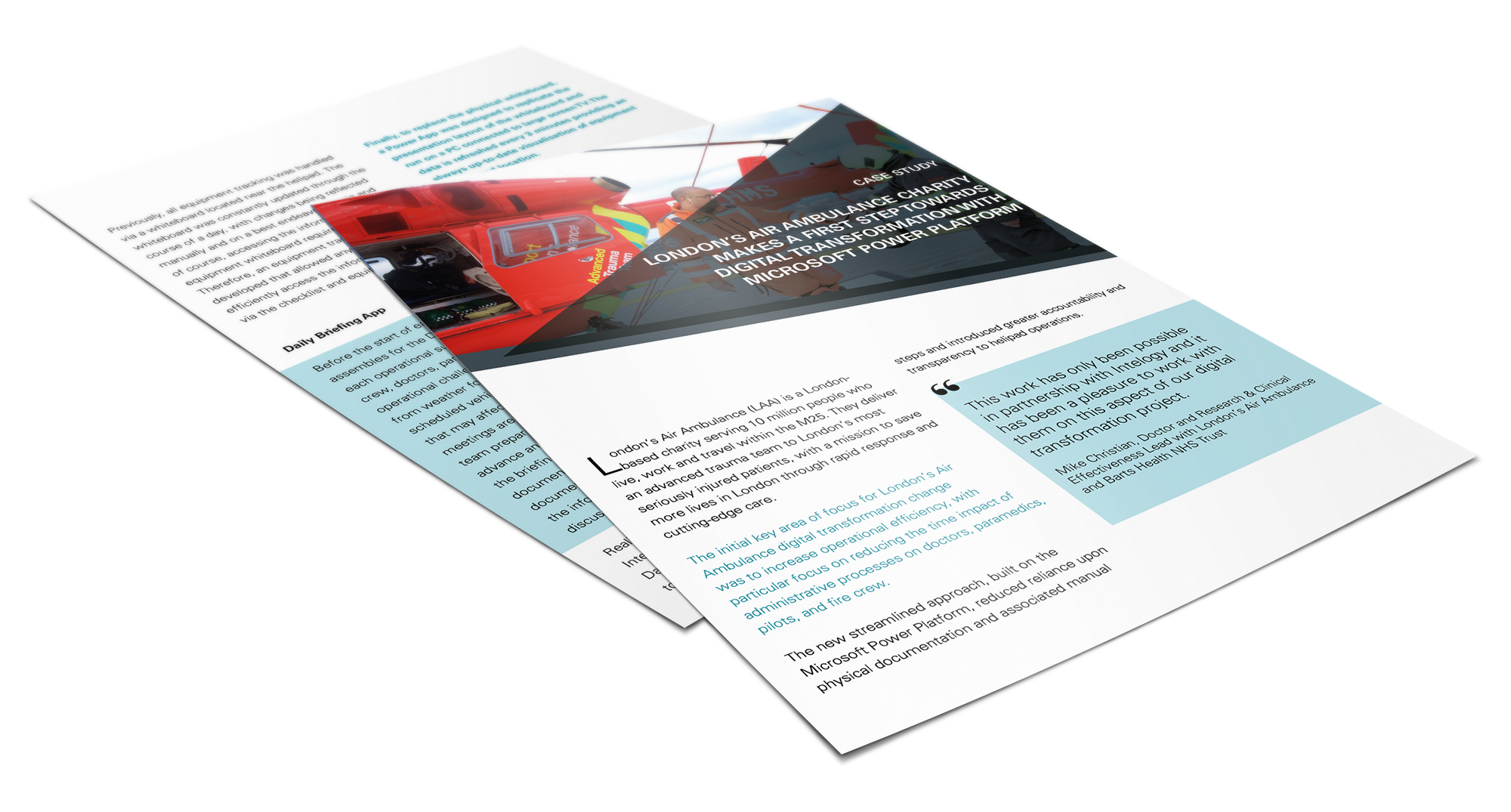 “This work has only been possible in partnership with Intelogy and it has been a pleasure to work with them on this aspect of our digital transformation project.” 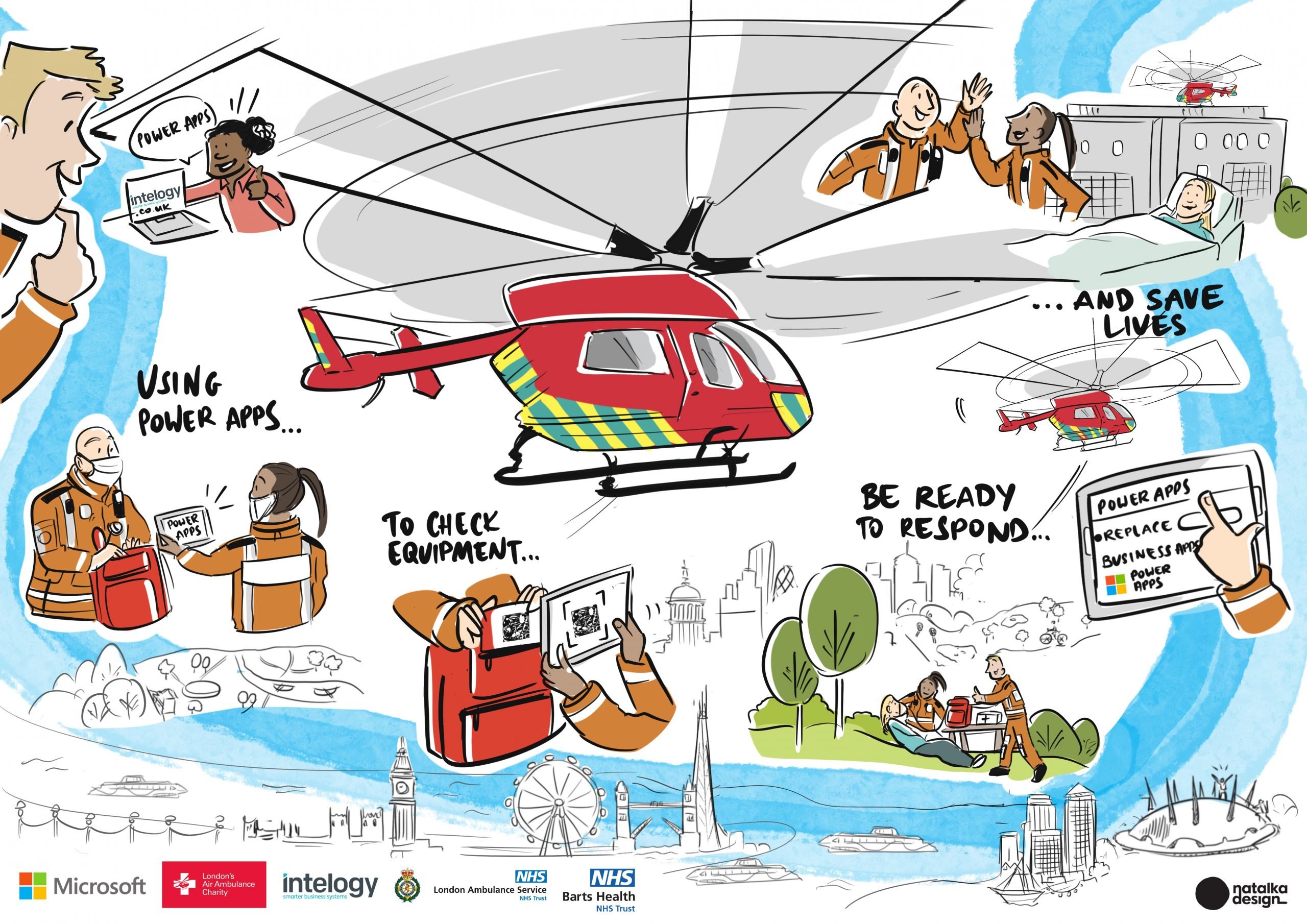 London’s Air Ambulance has multiple logistical, operational and governance processes that they must manage alongside their on-call duties, primarily relating to the documentation of non-patient data. One of the primary challenges facing the team operating from the helipad was a lack of electronic information management as information was split across multiple channels and systems, including external sources, which made it difficult to gain visibility of and report on progress and activities.

A high proportion of operational time was spent on manual information capture and data-processing, which was predominantly paper-based, and hindered situational awareness. The reliance on physical records prevented remote access to data, and many data-sources such as laminated checklists, equipment whiteboards and paper-based template forms necessitated an on-site presence. This paper format also meant there was an inability to automatically enforce the integrity of data-points, especially those required for real-time audit purposes such as checkboxes and signatures.

Processes with scheduled components, such as daily, weekly, and monthly checks, had to be intentionally coordinated and there was no automated system by which to manage priorities, handle deadlines and ensure compliance.

In the event of unexpected interruptions, documents did not get saved or sent, and sometimes lost. After a mission call-out, the staff would start the process over again, which was a source of frustration and could cause duplication of documentation.

There was also limited visibility of valuable insights such as equipment and vehicle statuses, making it hard to know where key equipment, medical bags and apparel were located and when equipment for both rapid response vehicles and helicopters needed restocking.

By cooperating closely with LAA, Intelogy was able not only to recreate digital versions of the paper-based processes, but also to facilitate the opportunity for optimisation of the core business processes themselves. By empowering LAA with knowledge and awareness of the capabilities of Microsoft Power Platform, Intelogy was able to go above and beyond a like-for-like digital recreation of the previous processes, and to identify and implement a number of substantial improvements to operational procedures. Ultimately this resulted in the creation of a suite of apps built using Power Apps to support a range of activities the team conducts on a daily basis.

The first step of the digital transformation effort was to replace the paper-based Equipment Checklists. Each checklist was implemented as a separate Power App and would store its data in the LAA Helipad Operations data model hosted in Microsoft Dataverse. By adopting a multi-app approach as opposed to a single, monolithic Checklist and Equipment Tracking app, it facilitated individual checklist delivery, simplified long-term servicing, and eased concerns over release management.

The layout of each checklist was dependent on the individual requirements that each existing checklist had, however, it was intended that each app would apply a consistent user experience to ensure familiarity with the processes and reduce confusion. Each checklist has been recreated as an offline-capable, touch input application available on any device to ensure a simple data entry and process flow.

Each app starts with a dropdown list to allow the person completing the checklist to choose the piece of equipment against which they are running a checklist. While aircraft and vehicle checks have a static design, for medical equipment bags there are two checklist types to select from: Restock and Full Check. A Restock allows for people to navigate through the checklist a lot more quickly and identify which sections of the back require re-stocking as a result of use on a previous mission, whilst a Full Check requires every item and all expiry dates be checked fully. 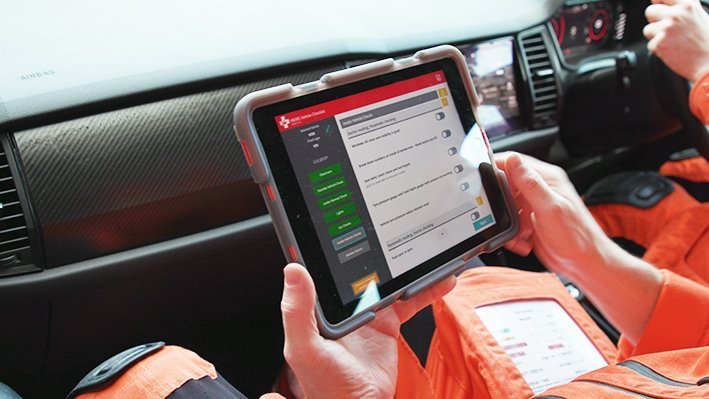 To complete a checklist, all the paramedic needs to do is indicate the status for each item in the checklist using a simple toggle switch, indicating whether an item meets the expected criteria or not. If the expected condition is not met, then a decision can be taken as to whether this represents a critical failure. Where the decision is that this represents a critical status, then the equipment is marked as out-of-service and flagged so that it will not be used until it is replaced/restocked and returned to an operational status. Even if critical failures are encountered, completing the checklist helps ensure that the re-stocking process can be more efficient as a complete picture of the required replacement supplies is obtained. Additionally, if a user tries to leave the checklist without checking all the items, they will get a warning to prompt them to come back into the list and to check the unmarked items.

Another valuable efficiency feature of the app is the function which allows a section to be marked as “sealed” and relates to how certain sections of the physical equipment bag use plastic pull-through seals to indicate whether that section has been opened. During a Restock check, the seal indicator allows the user to move swiftly through the checklist by being able to confirm that sealed sections have remained unused and thus does not require each individual component within the sealed section to be assessed. Conversely, the Full Check mandates that sealed sections must be re-opened so that expiry dates can be assessed, and the app additionally reminds the user to re-seal the section using a plastic tie and requests confirmation of this status.

Finally, at the end of the checklist process, the names of the team members who conducted the check are recorded, a summary of the checklist information is presented highlighting any non-conformance and where required, physical signatures can be captured on the touchscreen and a final confirmation button will commit the checklist data. In the event that the checklist is being performed in a location with no or intermittent network access, then the app will support storing the completed checklist offline until such time as network connectivity is re-established and the checklist data can be submitted.

With 2 helicopters and multiple rapid response vehicles in service, keeping track of the location of individual pieces of equipment is a constant challenge for the team. Add to this the effect of operational use and the need for re-stocking used equipment and the challenge becomes even greater. In response to this need, Intelogy developed a series of Power Apps that provided the operational team with a comprehensive overview of equipment location and status.

An equipment tracking Power App was developed to allow the team to view the status and location of all equipment items and combined the data captured via the checklist apps to provide an up-to-date representation of the status (i.e. operational/out-of-service) of each item of equipment with the ability to drill-down into the checklist data of any piece of equipment to assess any advisories placed on that item.

To facilitate the quick and reliable identification of equipment, within the central equipment management database, each item is assigned a unique QR code (much like a barcode) which is printed, laminated, and attached to the corresponding piece of equipment. 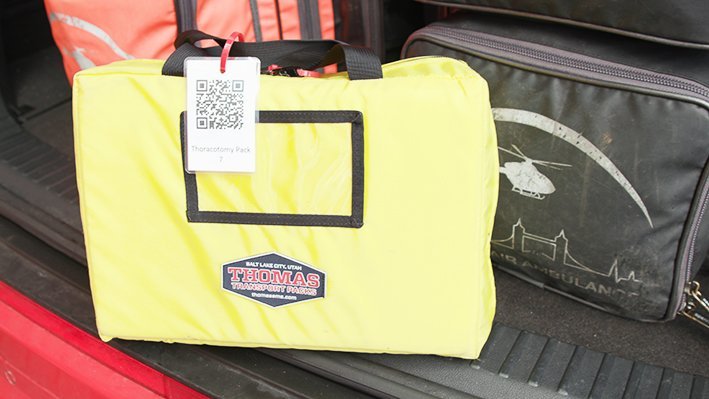 A further Power App was developed that allowed the user to select multiple items of equipment and then update the location (e.g. “Vehicle #2”) of these items quickly and efficiently. The app uses the camera on mobile devices as a barcode scanner to identify equipment by QR code, which dramatically speeds up the identification process, improves accuracy and reduces the probability of human error. Naturally, all equipment updates are recorded in a central database.

Finally, to replace the physical whiteboard, a Power App was designed to replicate the presentation layout of the whiteboard and run on a PC connected to large screen TV. The data is refreshed every 3 minutes providing an always up-to-date visualisation of equipment status and location.

Before the start of each shift, the team assembles for the Daily Briefing during which each operational sub-team (i.e. pilots, fire crew, doctors, paramedics) review and discuss operational challenges for the day. This can range from weather forecasts, planned road closures, scheduled vehicle maintenance and other issues that may affect operations for the day. The meetings are conducted in-person and each sub-team prepares their information for the briefing in advance and presents to the wider team during the briefing. As the meeting is conducted, a document is manually updated, and the finalised document is signed by each team to acknowledge the information provided has been reviewed and discussed.

Realising the potential for increased efficiency, Intelogy developed a Power App to support the Daily Briefing process. The app allows each team to prepare content ahead of the meeting and when the team is assembled, the app is able to be shown on a large TV screen providing visibility to all. A further productivity improvement was realised as previously, someone had to check the website each day and manually transcribe the lift times for London’s Tower Bridge so that paramedics in the rapid response vehicles would be aware of times during the day to avoid routes via the bridge. Instead, a Power Automate flow connects to the website and automatically ingests the published lift times into the database thus reducing the need for and time spent in preparing this information.

Upon completion, the information captured in the Daily Briefing is recorded to the database creating a permanent record of the meeting for future reference.

Finally, because all data generated via the checklist, equipment and briefing apps is now stored in a structured online database, Power BI – the data analytics component of the Power Platform – has been used to create a series of dashboards to help the administrative teams review and track operational data. Initially, the reports help track the completion of planned activities and record the outcomes of checklists and briefings. It is anticipated, however, that over time the information captured will help identify trends that will help the operational team anticipate issues before they occur and help LAA realise another ambition of their Digital Transformation strategy and become a more data-driven organisation.

With the successful delivery of the Checklists and Equipment Tracking apps by Intelogy, the operational teams at London’s Air Ambulance can now check, validate, and report on all their medical equipment packs and physically track every item of equipment. As a result, this first step of LAA’s Digital Transformation journey ensures that time spent locating equipment will decrease significantly, while data capture, as well as reporting, has become notably easier.

LAA’s operational team has seen a clear productivity win because of the solutions built on the Power Platform. The apps have proven to be intuitive and user-friendly. Data collection has become significantly more efficient because of the ability to support mobile and offline use and the Dataverse shared data repository has provided a single source of truth for operational data. The team has increased its ability to carry out reporting at specified intervals, which will ensure problem areas are discovered quickly and acted upon as soon as possible.

Finally, self-sufficiency in supporting the charity’s investment in these Power Apps in the long-term was identified as a key requirement. To that end, Intelogy provided specific team members within LAA with training on how to maintain the applications that have been developed as part of this project. As a result, LAA staff have begun to use those same skills to build entirely new apps, automations and reports on the Power Platform to assist the team in other areas to drive further efficiencies and process improvements.