Pepper Money is an award-winning specialist lender offering a range of residential, buy-to-let and second charge mortgages to customers who are experiencing difficulties obtaining a mortgage from other institutions. Following the acquisition of Optimum Credit back in 2018, a leading provider of second charge mortgages for homeowners in England, Wales and Scotland, Pepper Money required assistance in merging both IT infrastructures into a single cloud-based solution. This Microsoft 365 tenant-to-tenant migration also provided an ideal opportunity to undertake a complete digital transformation project, incorporating data migration, digitising business processes and developing a communications portal.

Intelogy succeeded at this complex tenant-to-tenant migration by fully merging both cloud infrastructures into a new tenant. After a period of meticulous analysis and planning, the data & workloads were migrated over a period of 5 weeks. This digital transformation enabled staff from both companies to come together as one organisation, allowing for efficient communication and collaboration, all whilst knowing that they are operating in a secure and compliant environment. 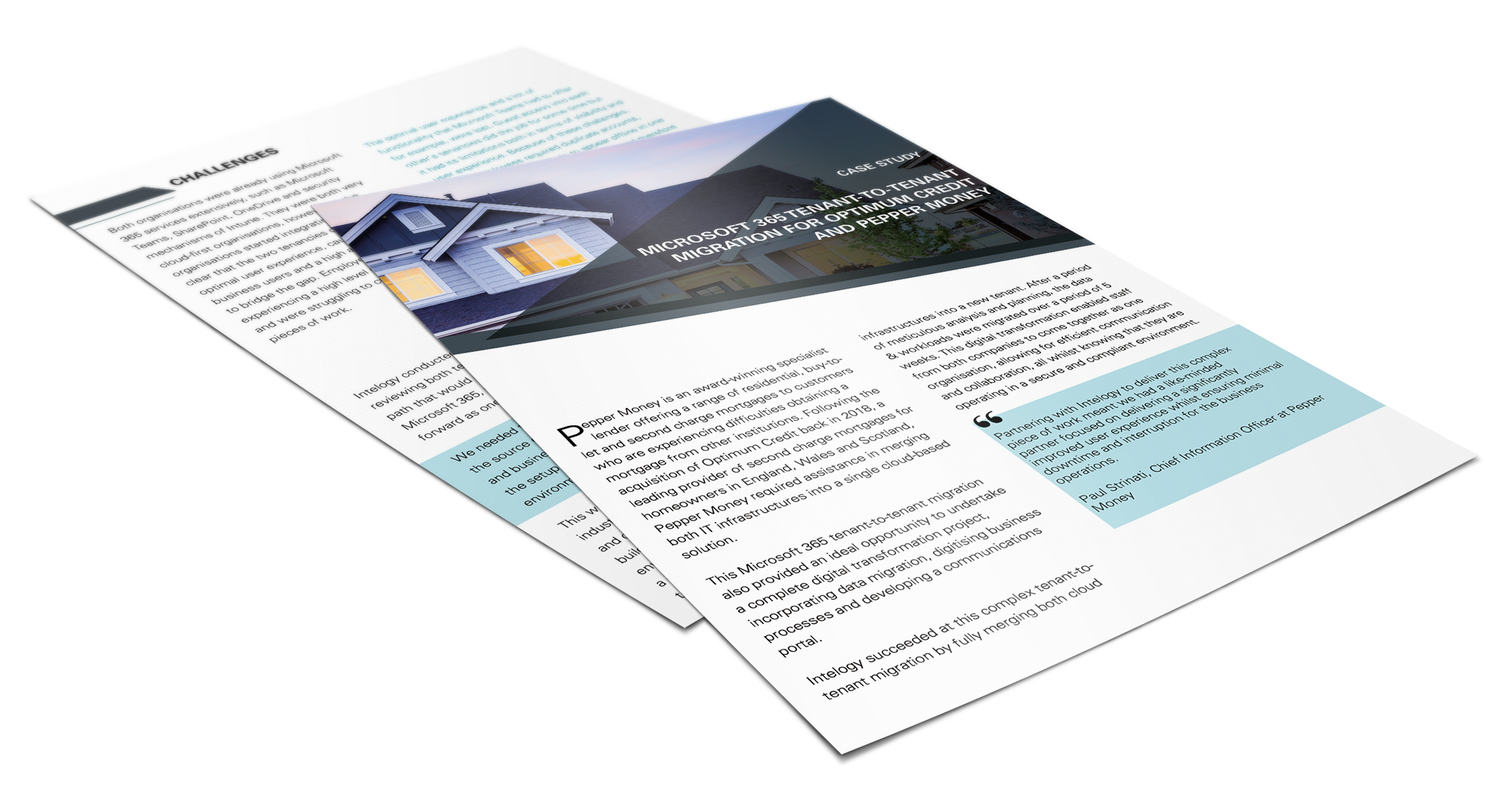 "Partnering with Intelogy to deliver this complex piece of work meant we had a like-minded partner focused on delivering a significantly improved user experience whilst ensuring minimal downtime and interruption for the business operations. Their knowledge and expertise in the M365 domain were excellent, and they worked seamlessly as an extension of our in-house team to ensure all M365 workloads and data were successfully migrated to the new tenant.”

Both organisations were already using Microsoft 365 services extensively, such as Microsoft Teams, SharePoint, OneDrive and security mechanisms of Intune. They were both very cloud-first organisations, however as the organisations started integrating, it had become clear that the two tenancies did not offer an optimal user experience, causing confusion for business users and a high administrative overhead to bridge the gap. Employees on both ends were experiencing a high level of disconnectedness and were struggling to collaborate effectively on pieces of work. The optimal user experience and a lot of functionality that Microsoft Teams had to offer for example, were lost. Guest access into each other’s tenancies did the job for some time but it had its limitations both in terms of visibility and user experience. Because of these challenges, many employees required duplicate accounts, which caused individuals to appear offline in one tenant whilst working in the other and therefore unreachable, when in reality they were available, just in the alternative environment. This lack of consistency and continuity became a real issue for users across the board.

Intelogy conducted an in-depth analysis exercise, reviewing both tenancies, to identify a migration path that would consolidate all aspects of Microsoft 365, providing the foundation to move forward as one organisation.

We needed to establish a clear understanding of the source environments along with the platform and business requirements that would determine the setup of, and migration to the target environment. This was achieved using a combination of industry recognised migration assessment tools and custom scripting capabilities to analyse and build an inventory of all workloads within the environment. The inventory needed to provide a clear picture of all the information related to tenancy configuration, identities, devices, email, security, compliance and ongoing management.

This migration could have gone two ways: Intelogy would move everything to an existing tenancy, or we would create a brand new tenancy and move both organisations into that tenancy. Pepper Money’s Head of Technology was in favour to go ahead with a completely new tenancy because both organisations had different ways of doing things, different policies, procedures and different ideas on how they wanted to work in the future. A new tenancy would be the fresh start they needed to agree on a new way of working and managing the tenancy. They could take the experience from both organisations and our expertise to move forward in a direction they wanted to go in together.

Once a full analysis of the current inventory had been carried out, Intelogy and both parties needed to mutually agree on the scope of the migration. This involved Intelogy understanding exactly what needed to be migrated, and where it needed to be migrated to. In addition, it was also important to determine what data needed to be archived, or simply deleted due to irrelevance or redundancy. We created a Migration Plan to detail the mapping between the source and target tenants to provide a clear transition path for everything being migrated. A Governance Plan was also created which outlined the key decisions regarding how the new tenant would be governed, this included the measures put in place to maintain the integrity of security and compliance within the new tenant.

Creating the Migration Plan posed challenges that are not common to typical migrations, it wasn’t just a lift and shift. The merging of two organisations meant that many departments were duplicated, e.g., HR, Compliance, Finance, etc. It was vital that Intelogy understood Pepper’s plan for these separated departments, and whether they saw a future where they may be merged. Intelogy hosted a number of workshops with Pepper to ensure that everyone fully understood all of the possibilities, along with a number of sessions to explain how a future working landscape may look. This gave them the opportunity to evaluate what they had and how they wanted to move forward.

The first activities carried out during the Build phase related to setting up and configuring the target environment. The specifications for all services documented in the platform design were implemented ahead of any user or data migration. This ensured the platform was fully prepared, fit for purpose and data being migrated into the tenancy would align with the decided governance principles.

After defining the Migration Plan and getting it approved, we started the execution. With the use of third-party migration tools, the majority of data transfer occurred without any impact on business users. The following products were selected to support this tenant-to-tenant migration solution: 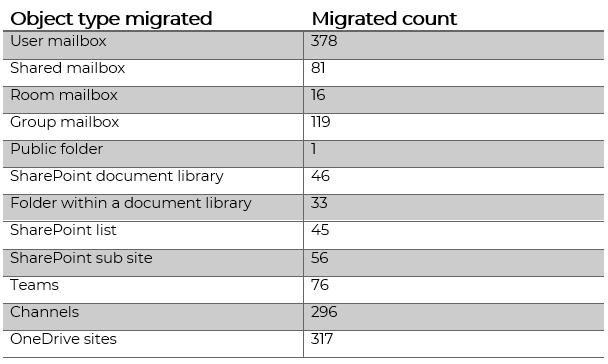 Following the cutover of each migration batch, all user client applications were reconfigured so that they were signed into the new tenant, providing an integrated experience for the new working environment.

Wrapped up inside the migration, Intelogy also delivered a Communications Portal serving as the new Intranet built on SharePoint. Each department was given their own communication site linked to the Communications Portal acting as the hub so that news could be aggregated from all departments. Also, they had their own departmental team site created to provide a space for team-related comms. The new Intranet will serve as the fundamental communication portal and will evolve with more advanced features in the future.

Microsoft 365 learning pathways was also deployed within the new tenant to provide end-users with on-demand up-to-date training material for Microsoft 365, this allowed them to better understand how to use the tools and applications available at a convenient time for them.

Intelogy ensured that both IT infrastructures were merged into a new tenancy with a minimal amount of disruption and downtime. We enabled all data protection features alongside the work. Aside from the technical elements of a migration and the actual moving of services and data, the execution of the project considered all the services, timings, dependencies, and most importantly, the interaction, training and communication required with business users.

Employees from both entities are now connected at all times and can easily collaborate with each other.